A First Look at the Ritz-Carlton Superyacht: Photos 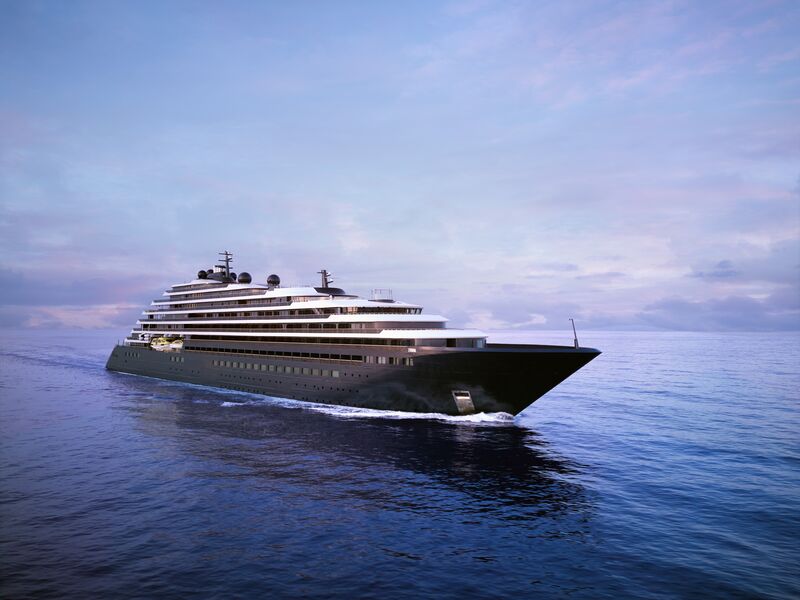 The 298-passenger Evrima aspires to bring Ritz-Carlton hotel comfort and service to sea. With sleek modern design, rich materials, plenty of lounge space, personalized service, and a restaurant with menus designed by a Michelin three-star chef—and after a nearly three-year delay—the first ship of the Ritz-Carlton Yacht Collection is ready for its debut. The 298-passenger Evrima will sail seven-night cruise from Barcelona to Nice in October. 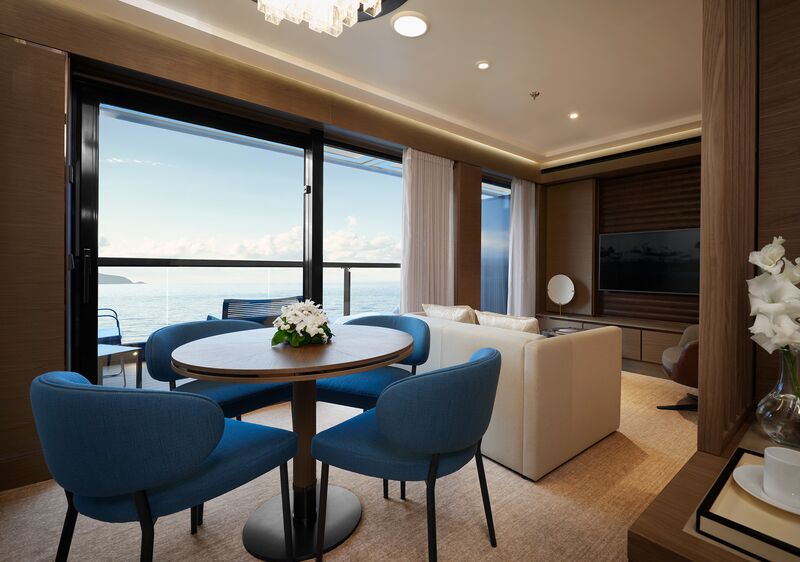 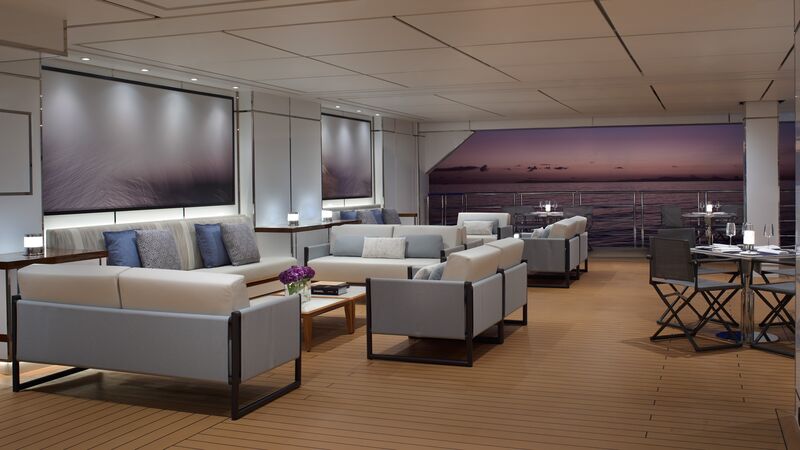 The well-regarded maritime architecture and design firm Tillberg of Sweden worked with a team from the hotel company to create a floating Ritz-Carlton hotel. 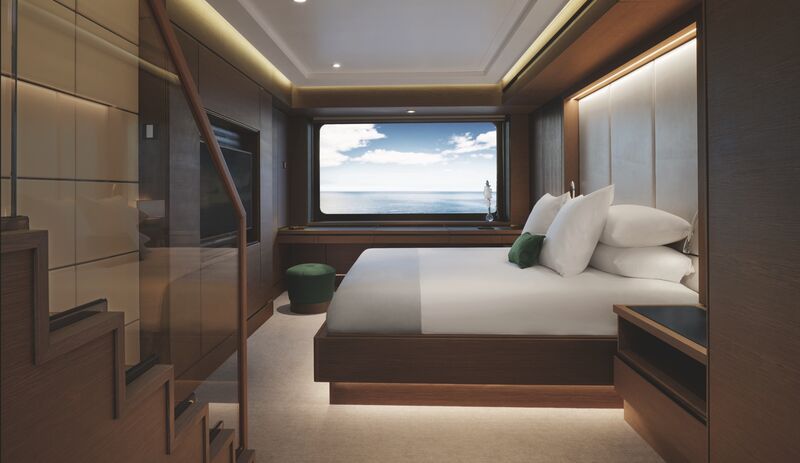 Room to spread out

Guests stay in suites with ceilings that are higher than the cruise ship norm, with king-size beds, double-vanity bathrooms, and private outdoor “terraces” overlooking the sea. Also on offer are resort like features such as a supervised Ritz Kids program with its own playroom ($45 per three-hour session) and a Ritz-Carlton-operated spa with indoor and outdoor treatment rooms—as well as indulgences such as a $395 non-surgical lift facial. The 623-foot ship has more space per passenger than any other luxury cruise ship.

Guests may take in ocean views while sipping complimentary champagne on loungers around the infinity pool or get even closer to water’s edge on the Marina Terrace, where handcrafted cocktails and light bites will be served when the ship is at anchor. From the marina, there are paddleboards, windsurf boards, kayaks, sailboats, and snorkeling equipment to borrow. Four plunge pools scattered around Evrima afford more intimate opportunities to take a dip with views.

The large Evrima Room, the yacht’s main restaurant, features dishes inspired by the line’s destinations. A five-course tasting menu with wine and champagne pairings at S.E.A. (Sven Elverfeld Aboard) was created by Chef Sven Elverfeld of the three-Michelin-starred Aqua at the Ritz-Carlton in Wolfsburg, Germany . At the Talaat Nam restaurant, dine indoors or out on Southeast Asian dishes—or head to the sushi bar. Room service is available 24/7. 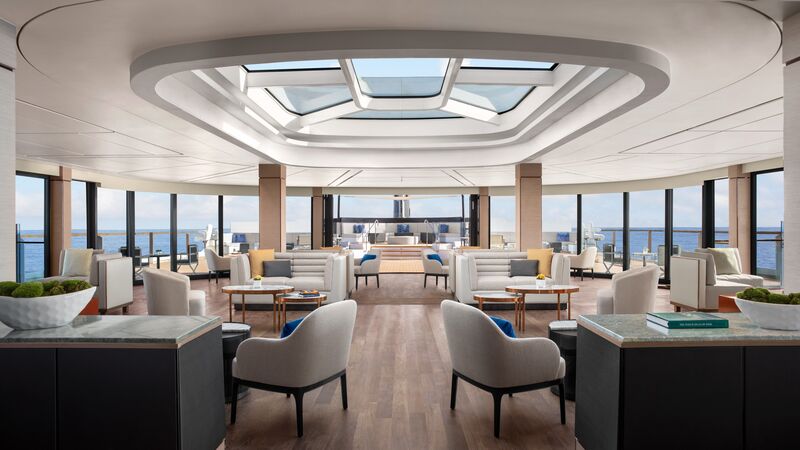 The ship’s Deck 10 indoor and outdoor Observation Terrace is a social hub—a place to take in views by day and to sip cocktails and enjoy live entertainment by evening. Late at night, the space morphs into a nightclub, with an opportunity to dance under the stars. Evrima has its own resident jazz and classical musicians, and local entertainers will come aboard to perform at select ports of call.

Every suite on Evrima comes with access to a personal concierge for requests from a cup of coffee to help organizing your shore excursions, as well as a separate concierge ashore to handle requests for private experiences and reservations on land. The goal is the kind of personalized service you expect to find at a Ritz-Carlton hotel: The ship has nearly as many crew members as guests.

In its first year, Evrima sails the Mediterranean and Caribbean on 7- to 10-night itineraries—following the yachting crowd to such hotspots as Ibiza, St. Tropez, Bequia, and St. Barts. Overnights afford time to play on land, and there’s a focus on beyond-the-norm shore excursions. For example, a tour of the Aruba Aloe facility is followed by an aloe-based treatment at the Ritz-Carlton, Aruba, while an evening excursion in Tenerife focuses on cocktail culture. Cruise fares are from $1,000 per person, per night—though you can find some sailings for less.

Members of the Marriott Bonvoy program can redeem 180,000 points for $1,000 in savings on the cruise fare, with increments of 90,000 points for $500 after that, It’s possible to pay for a 10-day cruise with about 2 million points  See participating Marriott Bonvoy hotels booked through the Ritz-Carlton Yacht Collection for more information. There are elite credits, too, those with Elite status will receive perks such as an invite to a special cocktail party and, depending on your member status, free laundry.